A significant time for the EUR/USD

Last week’s price action for the eurodollar was significant for several reasons. First, and perhaps most importantly, the congestion phase which began in late January, and extended throughout February, finally came to a close, with Wednesday’s price action holding below the platform of support in the 1.1000 region. Thursday’s price action then confirmed this return of bearish momentum with a down candle on above average volume, with Friday’s wide spread down candle on a surge in the US dollar adding the final nail. This phase of price action was associated with rising volumes, a classic volume price relationship, and one which merely confirms this as a genuine move with further downside momentum to follow in due course. As always, after such a dramatic move, the market has bounced higher in early trading in London, but the longer term outlook for the pair remains heavily bearish, and with the US dollar now marching higher towards the magical 100 region on the dollar index, all the major currency pairs look set for further moves to the downside in due course. To the left of the chart, the daily currency strength indicator for NinjaTrader is confirming this view, with the red line, the US dollar, continuing to rise steadily and now beginning to move into the overbought region to the top of the indicator. Meanwhile, the euro, the orange line, is continuing to move lower and moving into the oversold region. 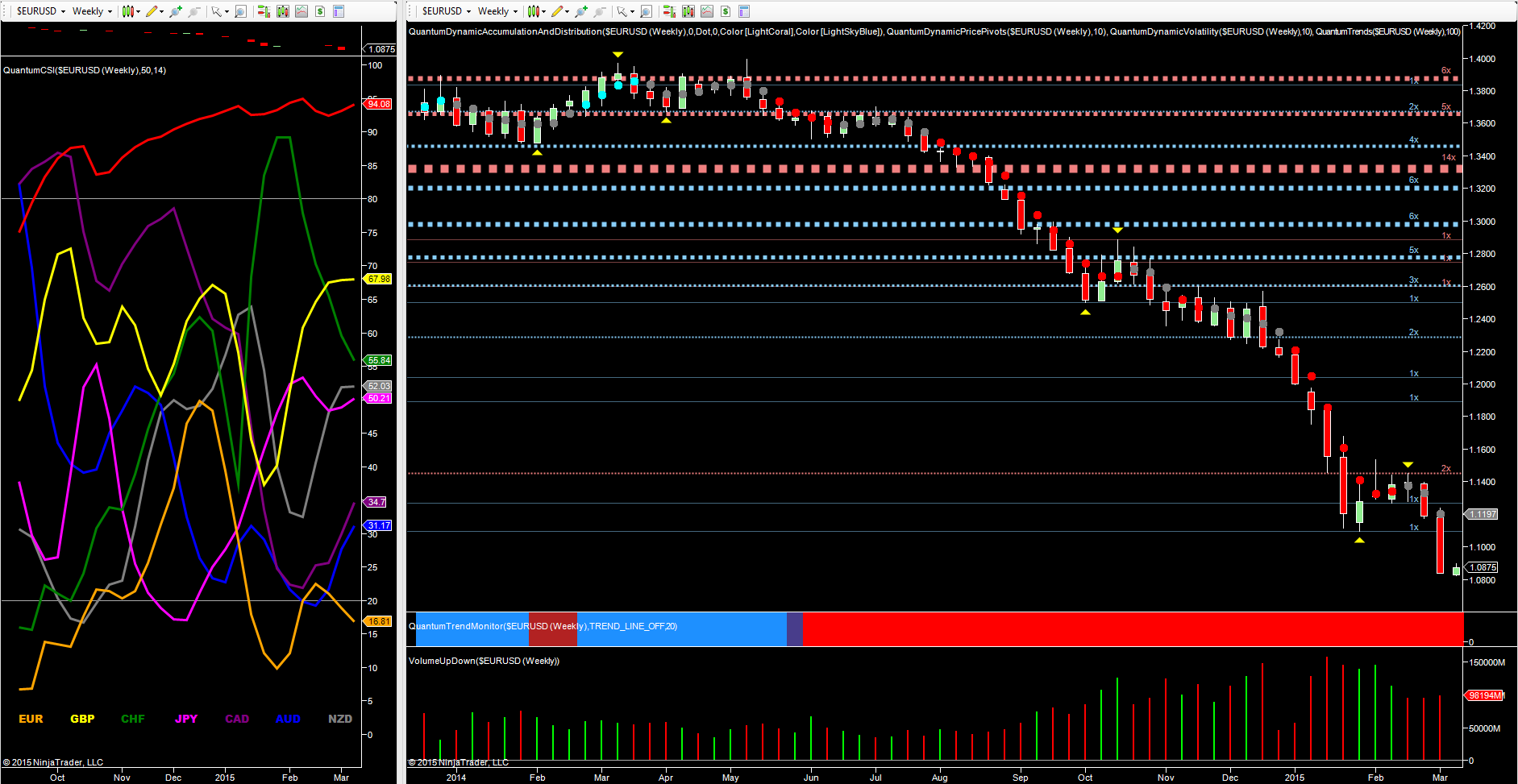 Moving to the weekly timeframes, the charts tell a similar story, but it is interesting to note that the volume associated with last week’s wide spread down candle is only average, and when compared with candles of equivalent spread in January, the volumes here are significantly higher, so perhaps this is suggesting that the selling pressure is declining here in the longer term. This aspect is also mirrored on the currency strength indicator, with the US dollar deep in the overbought region, and with the euro pushing lower into oversold. However, any major reversal in sentiment from the current bearish trend, for this or any other pair, will always be preceded with a buying climax and an extended phase of consolidation, which we have yet to see on the slower timeframes. Until we do, the current trend will continue driven equally by strong US dollar sentiment on one side, and chronic weakness in the euro on the other.